When I started at the London College of Furniture in the 1970s, I was quite surprised that we all had to start off by making a classical guitar. At that point in my life, I very much doubt that I had even heard any classical guitar music; my intention was to build solid bodies! However, in the first year I made a couple of Torres style classicals.

Then I made a couple of these ugly brutes- one I sold via The London Guitar Gallery. 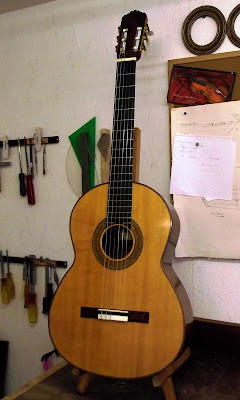 The shape was used, pretty much, by all of the students at the LCF and we rather pretentiously referred to it as a “concert guitar”. The one above was knocking around in my workshop for years, Phil Hare took a shine to it so I gave to him; much better for it to be used than gather dust.
And here’s what Phil did with it!
Once I started doing repair work for a Spanish guitar shop in Fulham, I had the opportunity to see what a decent classical guitar was really like. So my classical shape changed to this: 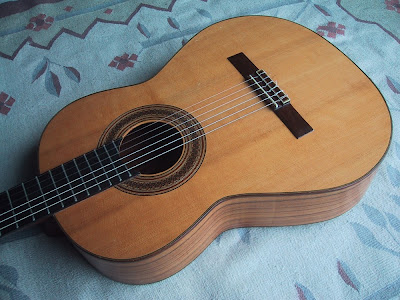 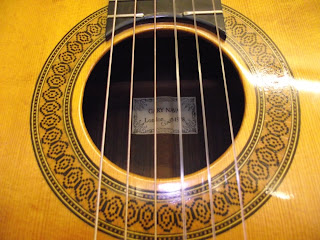 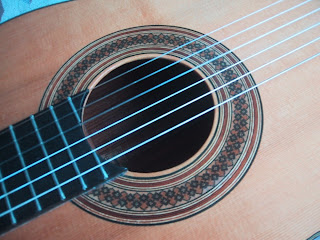 I built a number of these in my third year at the LCF and at least two were sold again via the London Guitar Gallery. The one above is made from Brazilian tulipwood and the photos were sent to me a couple for years ago by its current owner.

After leaving the London College of Furniture, I spent some time at the London Guitar Gallery, I made many more classical guitars. The original owner of this one sent me this photo a couple of years back too. 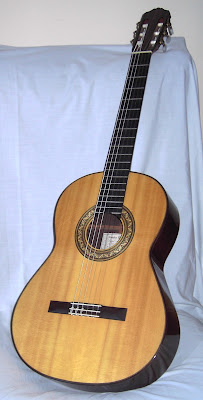 Whilst at LGG, classical guitarist Duncan James bought one of my guitars and a real high-light of this early part of my career was to see/hear my guitar played in concert at the Wigmore Hall. 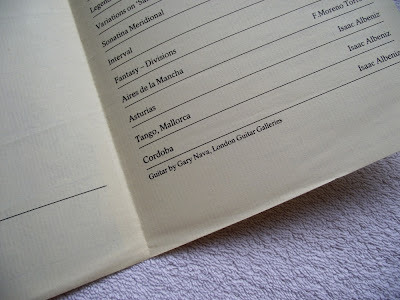 Also somewhere around this time I built a couple of Flamenco guitars; one cypress with tuners and one rosewood with pegs- where are they? Your guess is as good as mine!
As you can see this early period hasn't been well documented by me, so it would be great to get hold of some more photos.
Posted by Gary Nava, Luthier at 08:14