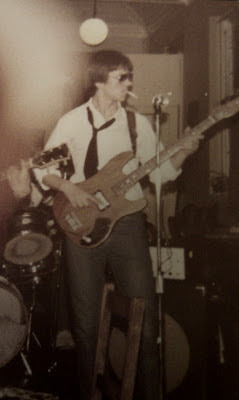 This is where it stared! This is the first instrument that I sold! Being played at a gig in the 1970’s by John East. I built this bass whilst at Sir Walter St. John’s school in SW London; the body is teak from a door step given to me by my uncle and it has a Guild humbucker. There were another two solid bodies made at school- one a fretless bass that John also had. Who knows where they are now!
John is now professional bass player and music teacher.

Around this time (1977?) I also made a Firebird style electric that I sold to a friend, Ray. He eventually sold it on; so that remains a mystery too.